A while back my folks moved to town in their retirement to be close to their mess of kids and grandkids.  It's been great having them closer and in our daily life.  My dad and I decided to spend a little time each week just geeking out with something completely unrelated to our jobs (he failed to retire properly) to rest our minds from the daily patterns.  He is a pseudo-retired pastor and I do Cloud Computing.  But we both enjoyed and wanted to learn more about hobby electronics or just making stuff. 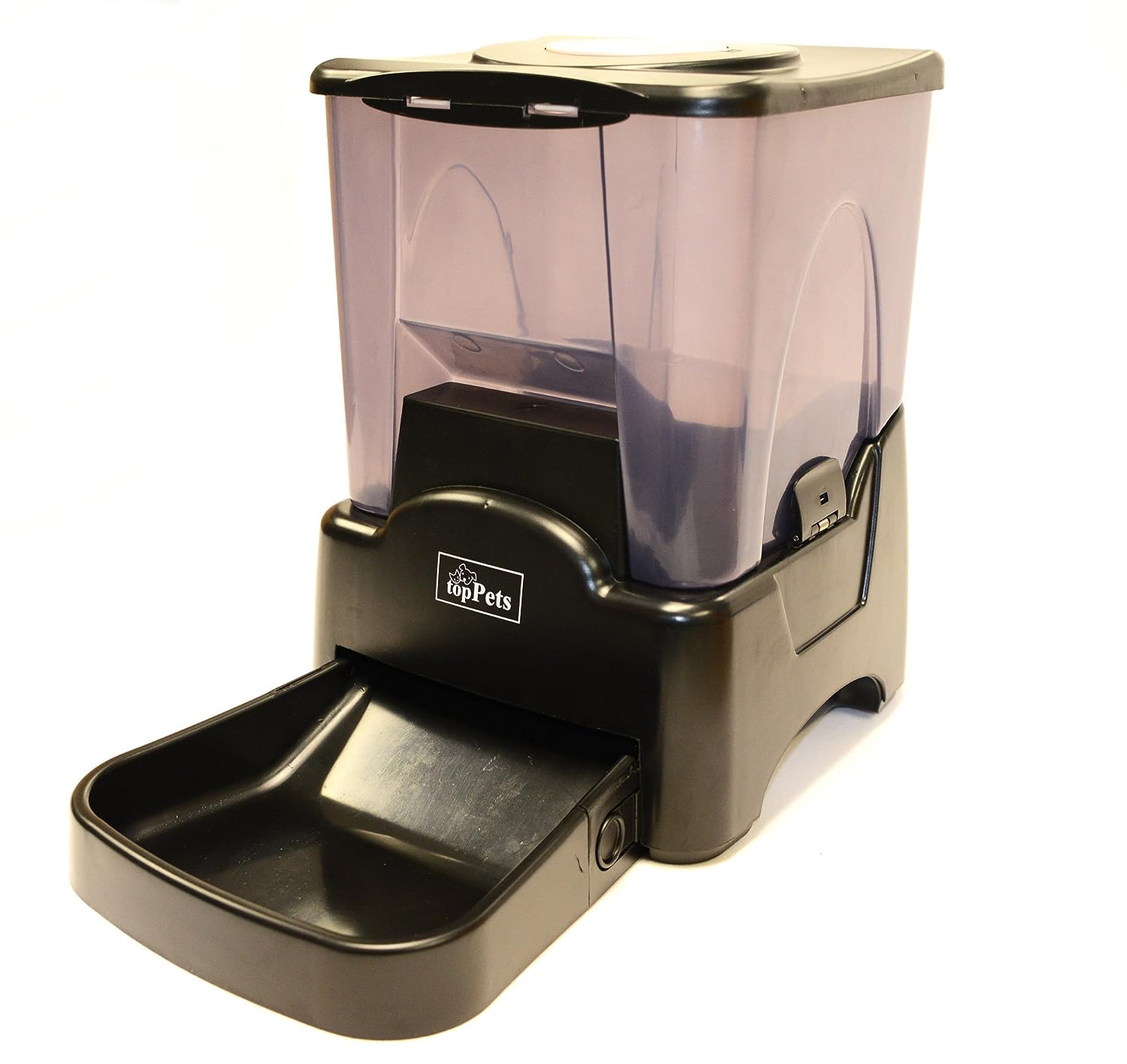 For our first project we decided to create something that would allowed my dad to feed his dogs remotely if he and my mom were out gallivanting (technical term) about.  Don't worry, the dog door allows for the post-processing to occur safely.

We did some research and found this cool project by Amanda Ghassaei:
http://www.instructables.com/id/Twitter-Controlled-Pet-Feeder/

She had done a lot of the research already like finding a powered dog feeder and determining how to hack it to work on demand.  Apparently, if you push the Volume and Set buttons at the same time it triggers the feed cycle.  She shows how to connect to the board and use an arduino to logically push these buttons.  We loved it, but wanted to add a few features:

After discussing the arduino + wifi cost we decided that a Raspberry Pi + usb wifi would be much less expensive and possibly more flexible.

We knew our first task was to disassemble the dog feeder and attached wires to the Volume and Set buttons on the PCB that controlled the feeder's manual feed function.  Amanda's article had excellent pictures and instructions on how to disassemble the feeder and locate these buttons.  But we didn't want to drill into the board as she described and possible eliminate the manual use of the buttons.  So we followed the traces on the board to find spots where we could solder wires for each button and ground. 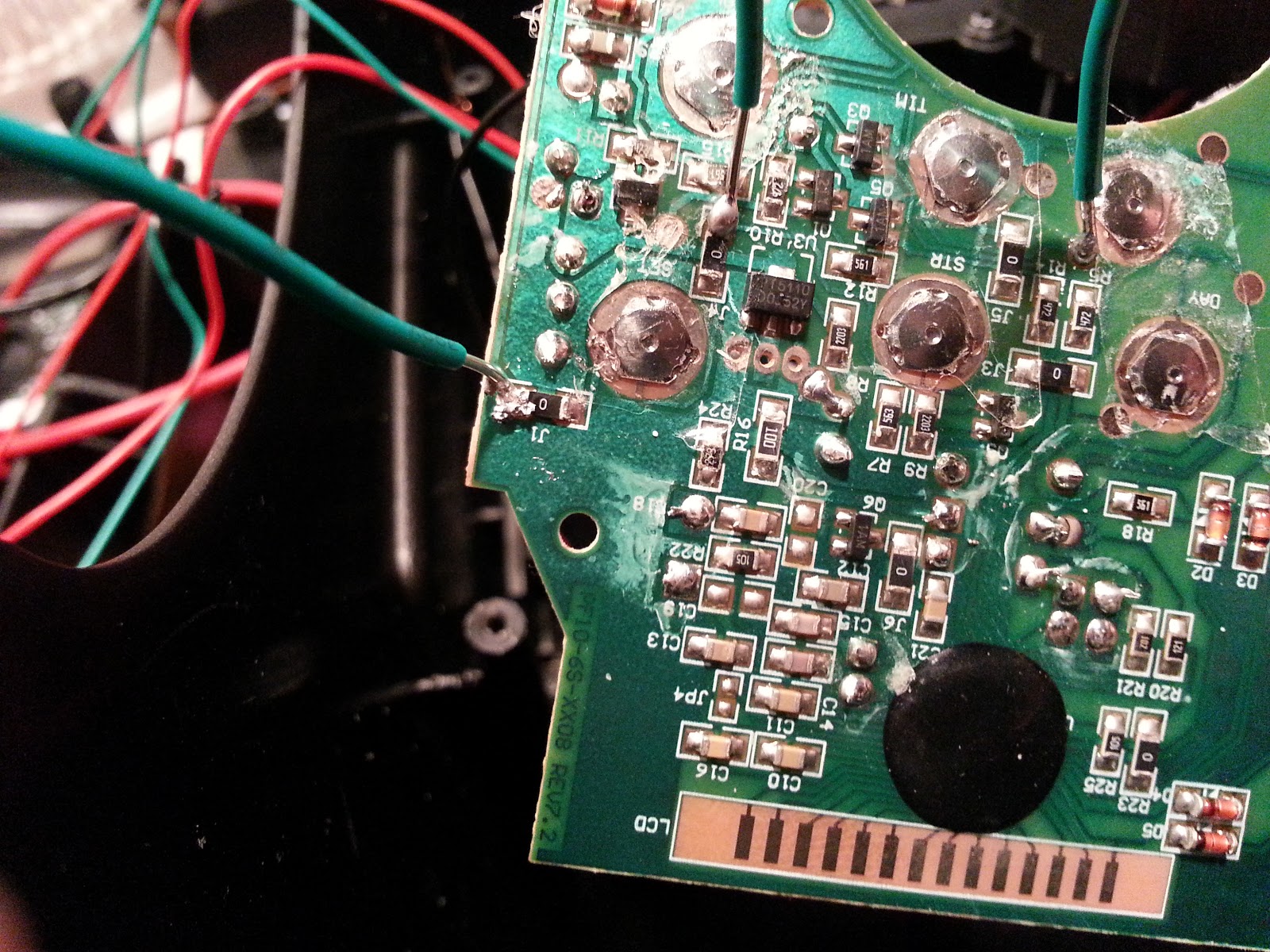 The first attempt failed miserably!  The wire we used was so thick that any bump to the wire popped the solder joint off the board AND the heat of soldering to the spots we found, desoldered some surface mount components!!  Fortunately the components were just zero ohm resistors and I could hack a wire back into place.

Take two had a better result.  I apologize for not having a close up of the finished board, but we eventually traced each button and ground to simple, round, fairly isolated, copper pads.  We used some magnet wire (enamel burned off at the ends) to solder to the pad to allow the flexibility we needed.

UPDATE: After requests for more details on where the solder points were on the circuit board, I borrowed a very nice close up image from Amanda's original project and highlighted the traces that we used.  We soldered to the round pads you can see highlighted.  The outer ring of the button contact was "common" and shared the yellow pad so each set of the relay boards described in Part II had one wire to the common pad and one wire to the red or green pad as seen in the image below.

We reassembled the feeder, leaving the leads handing out (we did remember to label them :-) ).  Also we had to be VERY careful maneuvering around inside this feeder.  It has very cheap construction and we accidentally knocked some wires lose a couple times from motors or PCBs.  Nothing a little solder couldn't fix, but we learned to be extra careful.

Next task was to figure out how to ground the vol and set button leads when commanded from the Pi.