I was inspired by +John Ellis's posting about his super cool garage security project to add more video and automation to my Pi projects.  He used a webcam in his project like I did in the Frankenfeeder project.  But I wanted to play with something new and hearing all the excitement around the camera module for the Raspberry Pi I thought I would take a look at it.
UPDATE: Step by Step tutorial version is online

I picked up a camera module from Newark and one of these really cool camera mount kits from Adafruit.


However a camera just laying on the table only takes good pictures of the ceiling, so what to do? 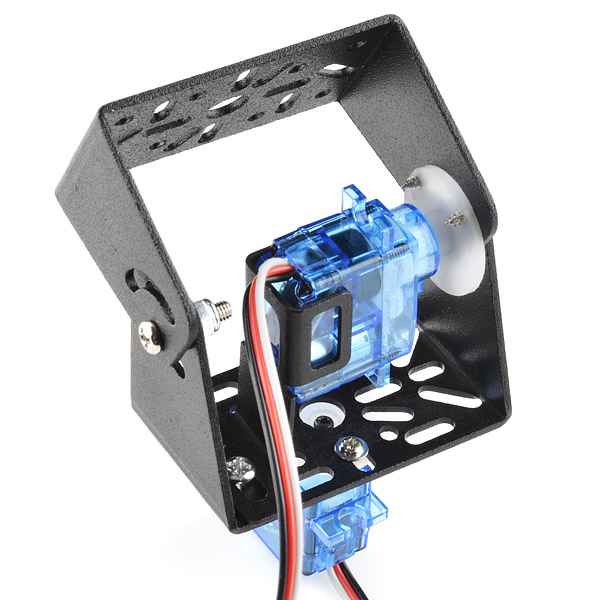 Sparkfun to the rescue!  They have a nifty pan/tilt assembly that works well with their small servos.  Based on some other reading, it appeared to me that the Pi has the ability to drive a couple small servos without having to complicate things with another external power supply.
So I ordered a bracket and put it together.  I employed my minions to help design a base for it from their lego kit and wired up the signal/ground/power pins on the servos to the Pi.  How I wired them up comes in a little later.

To get the camera module up and running required following these simple instructions on how to connect it and configure it with the raspi-config command.  I got something that looked like the picture below.  Oh, I also added a wifi adapter, as you can see in the pics, so the whole thing would only require one cable (power) to operate.
As far as wiring up the servos, that story is linked with the software I used to control the servos. Servoblaster is a great project by Richard Ghirst that allows very simple command line control of the servos.  I am only using two servos for left/right (servo 0) and up/down (servo 1). Using the handy Raspberry Pi pin out diagram I wired the power (red wire) for both servos up the +5 pins on the Pi and the black wires to the ground pins.  The signal pins (white wire) I wired up as prescribed by the servoblaster readme, GPIO 4 for servo 0's white wire and GPIO 17 for servo 1's white wire.  Female to Male jumper wires made hooking up the standard black/red/white cables to the Pi very simple.
After downloading and installing servoblaster code, I could now control the pan/tilt with commands like:

While this is not a super cool web based point and click interface like +John Ellis made for his garage project (No! I am not jealous of his leet web haxor skills.  yes I am.).  But command line works for my proof of concept setup.

The Pi camera also has really simple commands to take pictures and videos like:

Again a fairly command line/techie setup, but with simple commands I was able to capture pictures of what happens in my lab when I am not there.

This turned out to be a pretty functional setup.  I did discover that drawing too much power at once would freak out the Pi.  For a stable setup I avoid using both servos, the camera, and the network all at the same time.  I could reliably freeze up the Pi if I did all off them at once and I'm using a 2A power supply already.

I did take the project another step further.  I wanted to see if I could stream video off of the Pi. I wanted something quick an dirty for POC.  So I turned to my old friend netcat (apt-get install netcat).  I setup a script that would pipe the output of the camera video to nc pointed at my pc where I was taking the output from netcat and playing it with mplayer.  The turned out to work quite well.

My laptop has an IP address of 192.168.1.101 for this example.  Not really but because I'm paranoid, I won't tell you the real address.  Hold on while I adjust my tinfoil hat.  I have actually worn one once.  Have you?  Then don't knock it.  On the laptop I issued the command:

Next, on the Pi I issued the command:

After buffering for a moment, I had an awesome full screen video of the minions working in my lab.  You'll notice (especially since I'm going to point it out), that I used the & to drop the video stream into the background.  This allowed me to issue the commands to move the servos around while watching the video.  One of my real life minions did get suspicious when he heard the noise from the servos and for some mysterious reason the feed did not stay up very long.
It was a fun project.  I now have the proof of concept for a nice remote control security, nature photography, or minion spy project.  A little more Lego work to enclose the Pi too and it would be a reasonably portable kit.

Now I'm off to find out where the minions hid the camera module.  Silly minions.